Dean Markham
Lifelong resident of East Hampton. My family, now in the 9th generation here since the Town was first surveyed and partitioned by proprietors in 1721. I was elected as the State Representative in 1978 and served in the General Assembly until 1993. I am a CPA and currently work in East Hampton and area towns - Glastonbury, Portland, Marlborough, East Haddam and Colchester, and other Eastern Connecticut Towns as a Realtor affiliated with Berkshire Hathaway HomeServices New England Properties.

As I was driving over Barton Hill the other day, I was struck by the wonderful restoration of the Philo Bevin 3 story Second Empire style mansion constructed in 1872 situated at the crest of the hill. I grew up across the street in the 1960s, where my parents owned the Dutch colonial gamble roofed home built circa 1770 owned by William Barton, the founder of East Hampton’s Bell Industry. But what I remember fondly was my neighbor and friend - Alice C. Bevin. 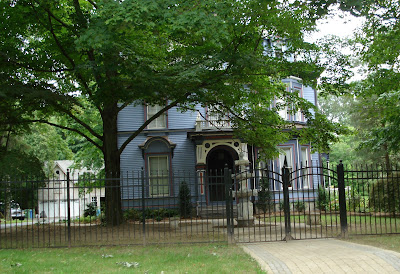 Alice Bevin was an East Hampton Born Parisian Artist who painted throughout the world from the Arctic Circle to the boarder of the Sahara Desert. In her own words from a 1940 Hartford Courant article, she stated “The people I have painted throughout the world .... have not only impressed me by the contrast of their various types but they have shown me many sides of life hitherto unknown. What knowledge of life one gains painting people. From all the portraits and studies I have done how much more I have learned beyond mere composition and the bare technique of painting that each new subject teaches us.” 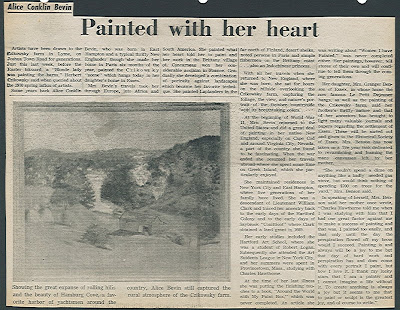 “Much has been written about the artist’s ability to read the souls of his sitters. He does so undoubtedly, whether consciously or not. Invariably, the sitter becomes confidential while posing in much the same way the patient confides in his doctor. The artist, listening with only half an ear as he mixes the flesh tones, gradually gains a knowledge of the character of his subject. Sometimes it has happened that in painting portraits of friends whom I thought I knew intimately, I have to my great surprise, suddenly discovered that I never really knew them at all.” 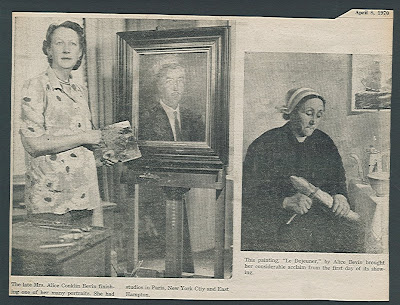 From 1940 Hartford Courant Article by Alice C. Bevin
Some of Alice’s noted subjects were Yamina, the Arab-dancing girl in Bou-Saada, a Lapp fisherman guide sketched in Finland, Hada, a drummer from the desert regions of Bou-Saada in Algeria, or the Sardine Fishermen of Concarneau. 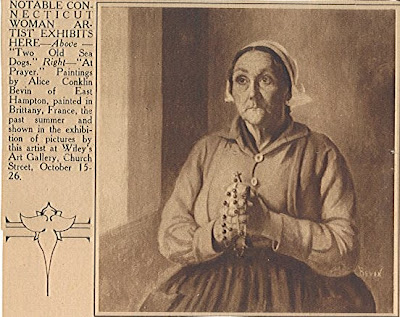 Her home was this incredible art gallery which housed a number of her paintings not on display in noted museums such as the Louvre in Paris. 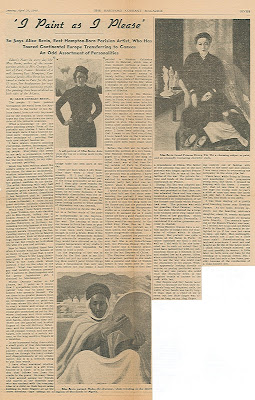 I met Mrs. Bevin, as we addressed her, through her grandsons, Granger and Nathaniel Benson who lived in New York City, but spent numerous weekends and summers here with their grandmother. We had wonderful times exploring the massive garage and barn that housed her studio, and a spectacular room that depicted a stadium. The four walls were painted with the spectators of a bull fight as if watching a matador challenge a bull in the center of the barn. I believe Alice's daughter, Betty Benson, painted this scene.
In my later high school years, I would do gardening and odd jobs around the property, replace burnt out electrical box fuses, and on occasion, house sit. One Valentine's Day, she presented me with a gift of one of her paintings - a winter view of our house painted from the 3rd floor of her home. The painting below was accompanied by a note that I still find amusing. A note accompanying a gift of her painting of our house on Barton Hill.

Alice Bevin passed away 40 years ago, but the paintings that graced her home, still touch my soul. I remember standing in her living room, which was a gallery of her paintings, surrounded by a dozen or more of her subjects. Two things struck me about these many varied portraits. First the lifelike detail and second the eyes. The eyes of each always seemed to sparkle reflecting a certain contentment of the individual. But second, the subjects eyes always seemed to follow me as I moved around the room - almost as if the captured image brought a little of the subjects spirit along for eternity in the portrait she painted. 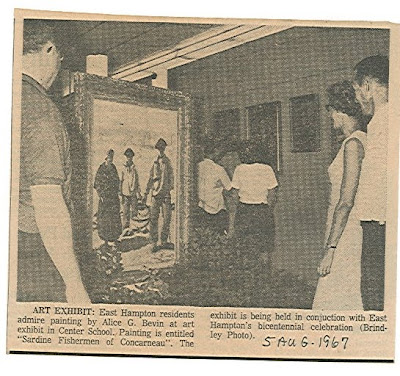 From her exhibit August 5, 1967 Celebrating East Hampton's Bicentennial.
Posted by Dean Markham at 6:18 AM